3) Train Heavy To Build Your Abs

Despite their greater percentage of slow-twitch muscle fibers, abs should still be trained in the 8-12-rep range. That’s something I’d do to train for the cobblestone look that comes from a bulging six-pack. To work the inner ab wall that’s not visible, I use static holds lasting 30-60 seconds.

4) Start With Your Toughest Exercise

As you fatigue over the course of your workout, you can do movements that are slightly less challenging. If you follow a workout like mine, you can do the static holds (vacuums) last, or do them between sets of other muscle groups.

5) Train Abs According To A Plan

I have a pool of 5-6 ab exercises I can do at any given time. Through trial and error, I’ve found that these moves produce the best results. I don’t need more variety than that to achieve my desired look. Depending on what’s open at the gym, I’ll do two moves with added resistance and another that’s a static hold like a vacuum. In all, I think three exercises is plenty of direct work on ab day. 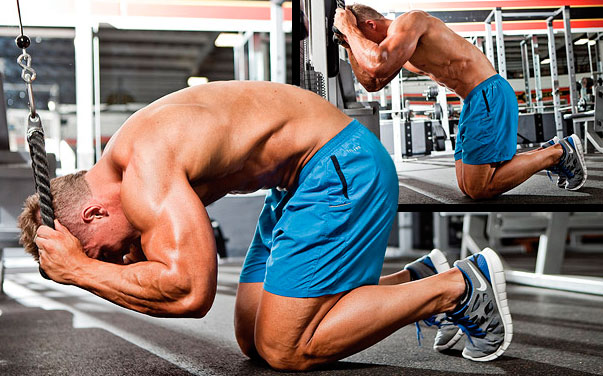 6) Learn The Difference Between Upper And Lower Abs

During a hanging leg raise, which better targets the lower portion of the rectus abdominis, it’s just the opposite: Your upper body is stabilized and you raise your legs up, which curls your pelvis up. When training lower abs, you have to visualize the hip engaging in the opposite way than when you’re doing a standing crunch for the upper abs. The key part of the movement is the hip hinge.