In the fitness world, there is no real definition for toning that is greatly recognized. Rather, toning is a term used to describe the end goal, which usually results from a combination of basic weight-lifting and fat-burning. 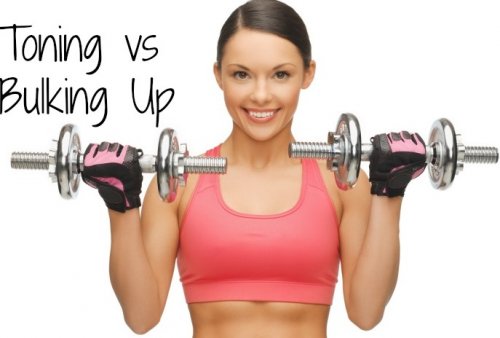 What about Bulking Up?
Typically, men want to “bulk up” and women usually wish to avoid building big, bulky muscles. Although there is no strict definition, “bulking up” means adding a lot of muscle mass to the body and possibly (although not always) reducing one’s body fat, too. Bulking up harkens images of bodybuilders and big football players—usually male and usually beefy!

Toning, on the other hand, typically refers to aerobics instructors and Hollywood starlets who have lower amounts of body fat and some visible muscle, but not huge muscles. So now that we have our definitions straight, let’s move on to facts and the fallacies about toning up and bulking up.

I’m not sure who first pioneered this idea that heavy weights will bulk you up, but it has stuck over the years and erroneously makes many people—both men and women—afraid of lifting heavy weights. While there is some truth to the idea that lifting lighter weights for more reps does a better job of increasing the muscular endurance, lighter weights will not help you “tone” better than heavy weights. In fact, because heavier weights build the strength of your muscles (and the size to a small degree—no Hulk action here), thereby helping to increase your metabolism and burn fat, lifting heavier weights with fewer reps (8 to 12 on average) and working until you’re fatigued is more effective at helping you reach your toning goals than lifting lighter weights. Not to mention that it’s more time efficient, too!