Besides a few brief stints of freedom, notorious British criminal and troublemaker Charles Salvador (better known as Charles Bronson) has been serving time since 1974. During these decades behind bars, and often confined to isolation, Bronson has become a fitness fanatic, creating workout programs that require only his bodyweight and a few odd objects. His extreme regimen has given him near-superhuman strength — he claims to be able to do 172 push-ups in 60 seconds, pick up a pool table by himself, and bend a steel prison cell door with his bare hands. He’s set many prison fitness records as well, including one for most push-ups in an hour: 1,727.

Now, it’d be easy to take Bronson’s claims with a grain of salt. The man is not only a convicted criminal, but his violent, loose-cannon behavior has earned him the label of “Britain’s most notorious prisoner.”

But Bronson is hardly the only inmate who’s managed to gain impressive strength without access to barbells, nutritious food, or supplements. Prisoners all over the world have created highly effective strength-building routines they can perform in the tiny space of their cell or with limited equipment in the jail yard. For men who are locked up, being strong and looking strong isn’t just about aesthetics and personal development; the appearance of size and prowess acts as a deterrent to attack and can be necessary for survival.

While most of us will thankfully never end up behind bars, I think we can all take a lesson from convicts on how to not let your circumstances be an excuse for your fitness goals. Below we highlight bodyweight exercises used by prisoners the world over to get strong and stay strong. 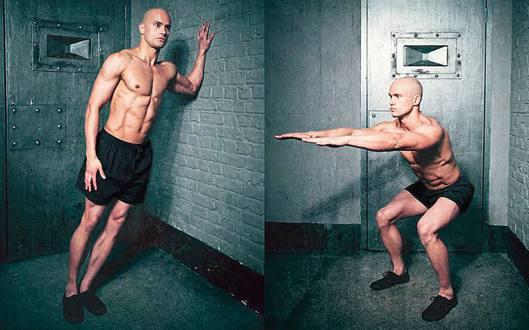 The Benefits of Bodyweight Workouts