In my opinion, body fat percentage is the best, most accurate way for guys to measure their progress on a strength training plan.  By now you guys probably know that I’m all about setting goals, and more importantly, having concrete ways to measure those goals. After all, having a goal is a prerequisite to actually getting somewhere…otherwise you’re just going through the motions and getting nowhere.

One of the biggest problems guys face when they’re trying to start or stick to a fitness plan is that their goals are too big, or are just not clearly defined. If “I want to be as ripped as Tom Hardy” is your goal, that’s great, but how do you measure that?

If we don’t have a clear idea of where we want to go with our fitness goals, it’s tough to set a plan for success and even tougher to stay motivated. For those guys that know they want to get as ATHLEAN as possible, body fat percentage can be a key measurement of success. 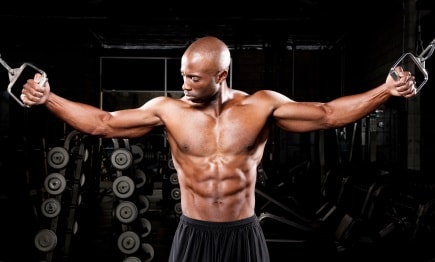 How Can You Measure Body Fat Percentage?

It’s important to keep in mind that not everybody stores fat the same way, so two bodies with the exact same body fat percentage could look pretty different. Fat distribution in men also changes as we age. 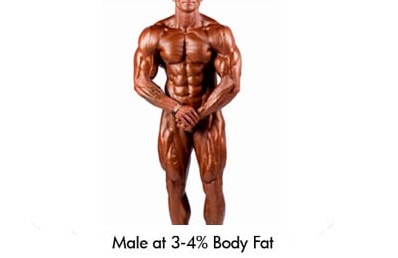 This body fat percentage is one that’s most often targeted by professional bodybuilders for competition. This is a very low body fat level and is tough even for pro bodybuilders to sustain, so this isn’t a recommended target range for most guys.

Typically in someone with body fat this low, the muscles are so well defined that the body could be used as a visual in an anatomy class. When someone is below 5% body fat, not only will you see the separation of the muscles, but you will also clearly see the striations and extreme vascularity (prominent veins).

The 5-7% body fat range is a little more than a bodybuilder has in competition, and it’s more accessible for a lot of guys. That being said, to maintain this body fat percentage, it’s going to require a strong dedication and to both fitness and diet and a lot of hard work.

Notice that in this range, the muscles are still very well defined and there is still some vascularity, but the striations aren’t as present as they are at 1-4%. The 5-7% body fat range is achieved by many fitness models in preparation for photo shoots. 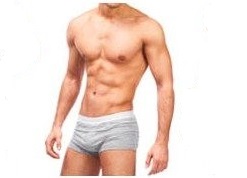 The 8-10% body fat range is a good target range for many guys because it’s more sustainable. It’s seen as a ‘healthy’ look by many and associated with the classic beach body. At 8-10%, vascularity and striations are less present, but still there in some parts of the body.

The abdominal muscles are visible, and you should be able to clearly see all three rows of abs. Some men may prefer to remain in this range for a bit less vascularity and a ‘smoother’ look.

In this range, you may see some abdominal definition if, for example, you want to oil yourself up and shine a bright light at yourself like this guy did. But who wants to walk around all slimy all the time? 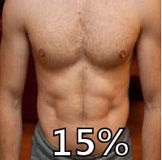 In this range, a guy may look pretty lean, but you just can’t quite see the abs yet. Muscle definition will also be slightly less visible. 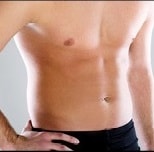 The 15% – 18% body fat range doesn’t look ‘unhealthy’, but there will be less definition in the abdominal muscles. At this range, depending on the guy you may start to see some love handles. There is some muscle definition in some areas, but it’s far less present than in the lower ranges. No vascularity will be noticeable. 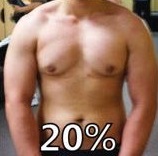 At 20% body fat, muscle definition starts to disappear and you can start seeing some hanging belly fat. Vascularity and striation are not present, but the overall look doesn’t give the impression that the person is that badly out of shape. The average guy probably falls somewhere in the 20 – 24% body fat range. 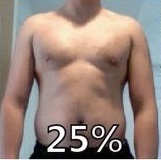 25% is the marker for obesity in men. Beyond this point, muscle definition is probably not present, and the higher we go the more ‘round’ the person looks. Keep in mind that some guys can actually be quite muscular and ‘huge’ at 25%, but it isn’t accompanied by much definition.

This range is considered ‘morbidly obese’ and little to no muscle definition will be visible. As I eluded to above, it’s important to keep in mind that body fat percentages can look different on different guys – depending on height, age or the way fat is genetically distributed in each individual body.  But I can tell you that body fat percentage is a much more accurate way to gauge progress than the scale.

Most guys don’t know exactly how much weight they want to lose (or gain). But they can more easily identify what level of muscle and leanness they’d like to get to.  That’s why setting your sights on a body fat percentage you’d like to reach is the best way to set and attain that goal.