What you’ll need: Resistance Band (or a dumbbell if you don’t own a band). This workout is grouped into three separate supersets. There is no resting between exercises, and only a 30 second rest after each superset. Complete all sets of one superset before moving onto the next superset.

Superset 1: 15 reps of each exercise 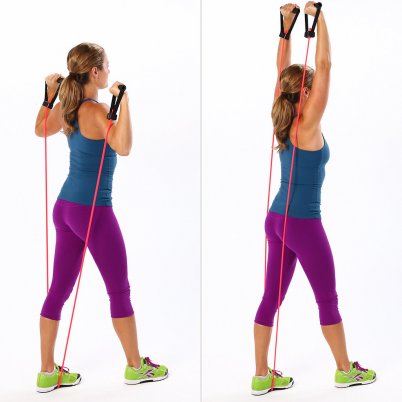 Begin standing holding the resistance band with both hands in front of your hips. Palms facing your body, leaving a few extra inches of band between your feet. Pull the resistance band upwards towards the sky and you bend your elbows out away from your body, while keeping your forearms parallel to the floor. Bring the band up as high as you can to your chin, pause and release back to starting position. This is one rep.