The Adonis Belt or Apollo’s Belt refers to the v shaped abs on guys. Those who have a low enough body fat percentage and are actually able to see the infamous 6 pack abs may be achieve the Adonis belt simply because it’s more a matter of genetics and your body frame than it is the amount of work you put in at the gym. Even the best abs workout won’t do the trick if you’re just not cut out for it so to speak. 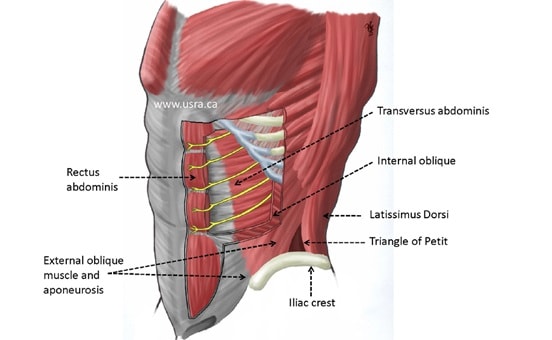 The v shape that guys can develop on either side of the lower abs is actually technically called the Iliac Furrow. It’s a small groove or indentation that’s created by the Iliacus Muscle which runs on either side of the abdominals from the upper hip bone (Iliac Crest) to the pubic region. Combined with the oblique muscles it forms a “v shape” on the front of the lower trunk region. The Adonis Belt derives it’s name from Adonis the Greek god of beauty and desire. In Greek Mythology, Adonis was a male figure of such masculine beauty that he was considered “god’s gift to women.” You could walk through the weight room in any the gym today, and you’re likely to find some guy checkin himself out in the mirror thinking the same thing! (It’s likely just as fictional.)

The coveted Devil’s Horns (a.k.a. the Abercrombie V) aren’t restricted to Brad Pitt and Zac Efron—though a personal trainer and a nutritionist won’t hurt. Here are four moves that work your entire core, abductors, quads, and glutes.

Whether you know them as the Adonis Belt, Devil’s Horns, or the Abercrombie V, the curving, carved hip hollows that flank the lower abdomen (think Brad Pitt striking a pose in the dank basement of Fight Club) are guaranteed to turn heads on the beach as shirts come off this summer. This routine, designed by Kelvin Gary, founder of New York City’s Body Space Fitness, will get you the look (as will a low body-fat percentage). “To define that area, you can’t target one particular muscle,” Gary says. “You have to work the whole core—not just the six-pack—and the abductors, quads, and glutes.” Follow up high-intensity cardio (to whittle down any extra padding hiding the muscles) with this workout twice a week. Rest 1 minute between sets and 30 seconds between exercises. And, of course, a clean diet sans alcohol and sugar helps.

Side Plank With Leg Raise 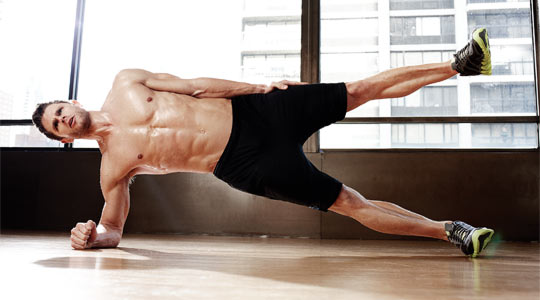 Get in side-plank position, resting on right forearm with elbow under shoulder, body aligned from head to heels, and left foot stacked on top of right. Lift left leg as high as possible [above]. Hold for 3 seconds. Lower. Do 15 reps, then switch sides to complete set. Do 3 sets. 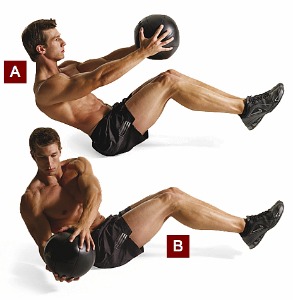 Sit with feet hip-width apart, flat on the floor, and hold a medicine ball in front of your chest. Lift feet slightly off the floor, balancing on your coccyx. Without dropping your feet to the floor, quickly twist to the right [above], then to the left. That’s 1 rep. Continue, moving rapidly from side to side. Do 3 sets of 30 reps.

Lie faceup on the floor, holding a medicine ball in both hands overhead. Lift upper body and legs off the ground, reaching medicine ball toward feet so that body forms a V [above]. Lower, returning to start with torso and legs fully on the floor. Do 3 sets of 12 reps.

Start in high-plank position, wrists under shoulders and body aligned from head to heels. Lift right leg and bend right knee, driving it toward the outside of right elbow [above]. Return to start. Repeat with left leg. That’s 1 rep. Do 3 sets of 20 reps.