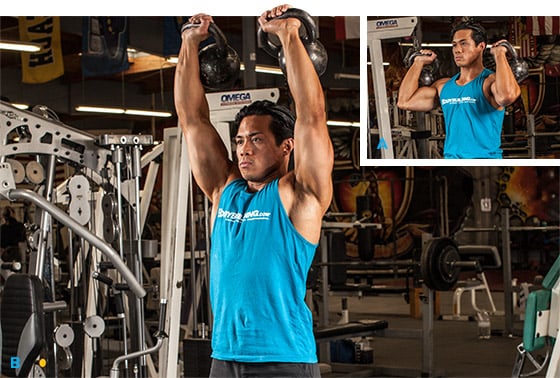 We rarely press overhead while sitting down in real life. Shooting a basketball, putting something up onto a high shelf – it all happens while we’re standing up, so standing presses are the way to go, creating a linked muscular chain from your hands down through your body core into your feet. Use kettlebells or dumbbells instead of barbells because they let the shoulder joint find its own way through a safe range of motion.

Stand with feet shoulder-width apart, knees slightly bent, spine held neutral (no arching the back), shoulders stabilized as described before. Raise one weight at a time, allowing the hand and wrist to rotate as you push upward.

Push press: Simply add a slight squat and then a leg thrust as you push up, since we typically also use our legs when pressing overhead. This makes it a total-body movement and permits higher loads.

Whether swimming, rock climbing, or just hauling yourself over that wall in your next Tough Mudder, vertical pulling motions are just about the most basic things we do with our arms. Both pull-ups and chin-ups work the entire upper body as a unit, but chins engage the biceps more, while pull-ups de-emphasize biceps in favor of the upper back and triceps.

Start with hands shoulder-width apart for chin-ups, wider for pull-ups. Stabilize shoulder blades (as described before). Bring your chin above the bar and lower down to straight arms on each rep.

Weighted push-up: Once you can do three sets of 10 pull-ups or chin-ups with body weight alone, add a light dumbbell between your legs, increasing the weight over time.

1 thought on “8 Exercises to Help You Stay Fit”