Bring The Situp Back From The Dead

“Men spend entirely too much time doing crunches, which involve only a 30-degree range of motion—way too small for significant muscle building,” says Patrick Hagerman, Ed.D., C.S.C.S., a professor at the University of Tulsa. “If you want to build your abdominals, do a full situp. Your abs spend more time working dynamically under tension, so they’ll grow bigger and stronger. Full situps also strengthen the hip flexors, which can get pretty weak if all you do is crunches.” (To improve your crunches, add a Swiss ball.)

To do situps right, lie on your back with your feet flat on the floor, knees bent about 90 degrees, hands clasped lightly behind your head, and elbows out to the sides. Tuck in your chin, contract your abdominals, and roll all the way up until your chest nearly touches your knees. Then slowly roll back down. 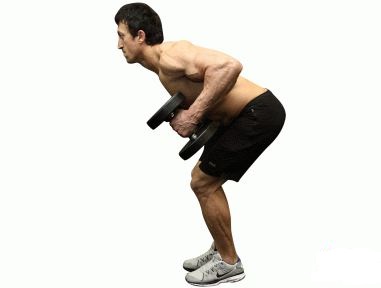 By working while standing, you involve more muscles and burn more calories, says Douglas Lentz, C.S.C.S., director of fitness for Summit Health, in Chambersburg, Pennsylvania. “Except for a few sessions devoted to increasing mass, our athletes do almost everything standing,” he says. “It engages your core, so your total strength increases.”

A classic example is the bent-over dumbbell row. Most men lean over and brace themselves on a bench, then perform the exercise with one arm. Instead, assume a wide, stable stance and bend from the hips, keeping your back flat—and don’t use a bench. Perform your rows from that position. You’ll work your core for stability and do a bit more mid-section work. You won’t be able to lift quite as much weight, but your entire body will benefit from the move.

Whittle While You Wait

Instead of sitting around working your mandible between sets, exercise another body part. “Supersetting helps you use your time better,” says Lentz. And, if you do it properly, it builds more muscle. For the best results, alternate lower- and upper-body moves, such as a leg press followed by a lat pulldown. That way, each muscle group has time to recover between sets. Alternating upper- and lower-body exercises also keeps your heart rate revved up and stimulates your circulatory system, so you deliver more oxygen- and nutrient-rich blood to your working muscles and burn more calories.

Don’t like blending upper- and lower-body workouts? Do ab work between sets. You’ll be less likely to blow it off than if you save it for the end.