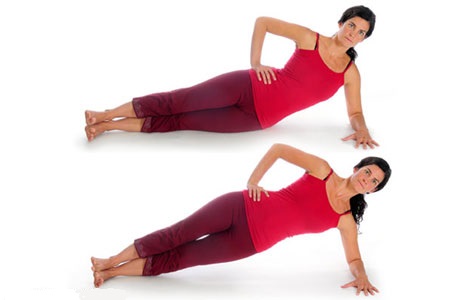 Start out in a forearm plank position, then turn your hips so they’re stacked on top of each other, facing the left side, with your right forearm on the floor and the left hand on your hip. If you’re laying on a mat, make sure your forearm is parallel to the edge of the mat. Pulse the hips toward the ceiling until you start to feel a burning sensation. Then, reach the top hand up and twist the body toward the floor, threading your top hand through the space between you and the floor, while maintaining your side plank position. Return to the starting position and pulse the hips upward, then repeat. After 2 minutes on one side, come back to a center plank and then turn to the other side.

Challenge yourself: When you’re in side plank, lift the top leg up so that one leg is higher than the other, suggest Liotta. Stay like this for the duration of the exercise. 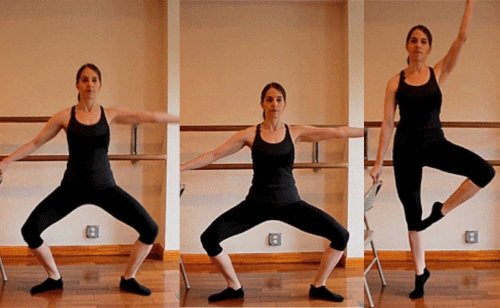 With one hand, hold onto something for support, such the back of a chair or a countertop. Start in second position with your legs in a wider than hip-width stance and your toes turned out, then bend your knees into a deep plie, trying to get your thighs parallel to the ground. Then, come up to a figure four position, bringing the outside leg up, toe to knee, leg turned out. Keep the outside arm in ‘high fifth,’ or raised above the head.

Repeat for eight counts, moving from second position plie to figure four, then perform another set of eight with the inside foot in releve, or raised so you are on the ball of your foot. Repeat on the opposite side.

Challenge yourself: Storie suggests after performing the sequence, hold in second position plie, then raise both feet to releve and pulse for three-to-four sets of eight.

The Xtend Barre Back Attitude and Tendu Lift Series 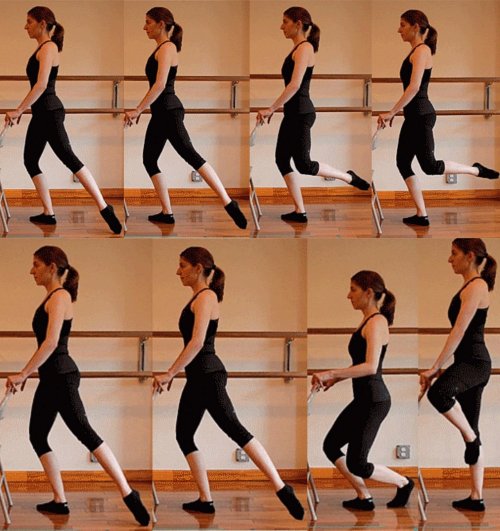 With two hands, hold onto something for support, like the back of a chair or a countertop, and face it. Bring your feet to first position, or heels together, toes turned out, and knees softly bent. Take the left leg back behind you into an attitude position, with the raised leg bent, keeping the leg as parallel to the floor as possible. Extend and bend the raised leg for 8-16 counts, then pulse the leg upward for 8-16 counts, keeping the leg out directly behind you. Finally, move to a curtsy, bringing the working leg behind standing leg, so that the ankles are crossed. Flow back and forth between curtsy and a figure four position for 2 sets of 8 counts. Repeat on the right side.