11. Change your mindset, notes Michele Promaulayko, editor-in-chief of Yahoo! Health and author of 20 Pounds Younger.
If deprivation diets haven’t worked for you in the past (and do they really work for anyone?), change “never” into “sometimes.” “Just because it’s called devil’s food cake doesn’t mean it’s evil,” says Promaulayko. “Labeling foods as “sometimes” for indulgences and “always” for the good stuff will keep you on task better than quitting cold turkey.”

12. Recognize if it’s sugar addiction, Kathleen DesMaisons, PhD, author of The Sugar Addict’s Total Recovery Program, advises.
“Craving is always withdrawal,” says DesMaisons. She explains that when you eat sugar, your body comes to expect it, and when you don’t get it, you crave it. This kind of addiction can’t be overcome by willpower alone. “It’s not willpower. Most people think, ‘Oh it’s just that I’m weak willed,’ but they don’t realize that willpower doesn’t work because of the biochemistry. It’s actually the same brain chemistry as going off of heroin,” she says. By recognizing sugar addiction, you can then approach getting it out of your diet with self-compassion and forgiveness.

14. Reward yourself with exercise, David A. Kessler, MD, author of The End of Overeating suggests. Exercise doesn’t need a reward. Exercise is the reward. “A substantial body of science tells us that exercise engages the same neural regions as other mood-enhancing rewards and produces similar chemical responses, says Dr. Kessler. 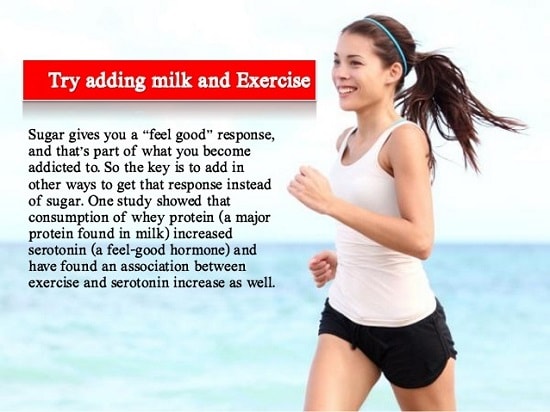 15. Stop drinking liquid sugar, notes Ellen Gustafson, author of We the Eaters.
“For both adults and children, the largest source of added sugar in our diets is sweetened beverages, especially soda,” says Gustafson. “In fact, almost half of the added sugar we now consume comes from sweetened soda and energy, sports, and fruit drinks.” She points out that while the American Heart Association recommends people have no more than 6 to 9 teaspoons of sugar per day, a 12-ounce soda has 10 teaspoons.

16. Ditch fruit juice is the recommendation of Harley Pasternak, MSc, author of 5 Pounds.
You see “fruit” so you think it’s healthy, but really, it’s just an overhyped source of sugar. “Containing neither protein, fat, nor fiber, fruit juice is calorically dense, provides no satiety, and receives 100 percent of its calories from sugar,” says Pasternak. Opt for tea, coffee, or water—drinks that are all naturally zero calories. That said, fruit itself isn’t off the table. “Just compare a cup of unsweetened apple juice with a medium-sized apple,” says Pasternak. “The former contains 114 calories and zero fiber; the latter has only about 72 calories but boasts 3.5 grams of fiber.”

17. Use subs smartly, Dave Asprey, author of The Bulletproof Diet, cautions.
There’s a big difference between safe sweeteners and sugar substitutes that make your sugar cravings worse. “Xylitol, a sugar alcohol, is found in many fruits and vegetables,” says Asprey. “Women who use xylitol have less osteoporosis, and xylitol is well known to inhibit cavities, tooth decay, and even sinus infections.” What not to use? Aspartame, sucralose, or acesulfame potassium, as these alternatives have been linked to health issues, including cancer and gut bacteria disruptions.

18. Address your body’s needs, Paddy Spence, CEO of Zevia, says.
Spence takes a divide and conquer approach to handling sugar cravings. “The craving for sweet can be a craving for sweet, but it can also be a craving for caloric intake,” he says. Figure out what you’re body is really asking for by eating something savory, healthy, and full of protein, such as nuts. If you’re still craving something sweet, he suggests using a safe replacement like stevia.

19. Don’t get too hungry, warns Jorge Cruise, author of Inches Off! Your Tummy.
“Most people make poor eating decisions when they are missing meals,” says Cruise. The good news is that this means you can eat more—well, more frequently that is. “Keep your cravings at bay with a healthy snack between regular full meals.” He likes deli meat and cheese roll-ups, or just munching on just about any kind of veggie under the sun.

2 thoughts on “How to Stop Eating Sugar: 19 Steps”