What’s it take to build a pro-level midsection? Cellucor’s Craig Capurso enumerates the 18 most-important rules when it comes to bringing out your abs. Everyone, it seems, has an opinion on the best way to train abs. Whether it’s doing bodyweight ab exercises for higher reps to keep the midsection tight and trim, or weighted moves for lower reps to build up the bricks of the six-pack, the differences are as diverse as the qualifications of the fitness professionals who espouse them.

They can’t all be right, can they?

In my experience, there are a number of smart ways to approach your ab training, and others that don’t seem to be as effective. People asked me to compile a list of the most important ones, which we’re collectively calling “laws.” Hopefully you can walk away with more than a few nuggets that’ll enable you to train smarter on ab day.

1) If Your Abs Are Weak, Do Them At The Start Of Your Workout

You have the most energy at the beginning of your workout. Wait till the end of the workout and you’re a helluva lot more likely to walk away without training abs. Another method that works is to train abs between sets of a larger body part. Maybe not on your heaviest sets of legs, but later on in your workout, this strategy is effective because ab training isn’t tremendously demanding on your respiratory or nervous system.

In my case, my core is already dominant just from years and years of training, so I train my abs last. Quite frankly, if I miss an ab workout, it’s not going to change my life. 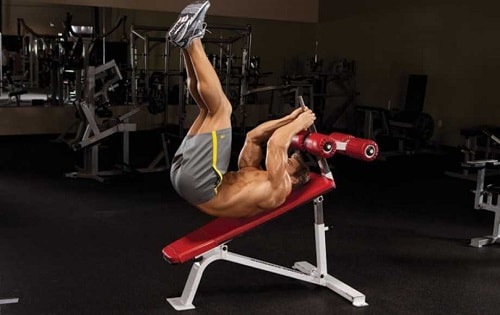 2) Heavy Lifting Is No Substitute For Direct Core Work

When you’re doing heavy standing movements like deadlifts, bent-over rows, military presses, and Romanians, your core has to work overtime to maintain a safe spine position. Hence your core, which includes abs, is getting lots of work, even on non-ab days. However, your abs are contracting isometrically for the most part—that is, they’re locking your spine in a safe position, but they’re not shortening or stretching. Isometric ab training like this builds strength from that angle only, rather than over the entire range of motion.