OK, Tyler didn’t really say that. But as women everywhere reminded their dates in the post-movie recap, he did have some serious abs. Or maybe it was the guy who played him—you know, ol’ what’s-his-obliques. But whomever they belonged to, they were the kind of muscles that weren’t just made in the kitchen. They were carved by hard training, and revealed by smart diet choices.

But here’s the thing about ab training: What you do is only one half of the equation. What you don’t do is the other—and I’m not just talking about the usual pre-photo shoot fitness model tricks like avoiding sodium, carbs, happiness, or air. I’m referring to the piles of abominable abdominal misinformation lurking out there, both on television and in casual conversation. Perhaps more than any other body part, ab training keeps you constantly on guard against making basic mistakes.

Below are 10 of the biggest ab training mistakes I see people make. I could say I “always” see people make them, because that’s how people talk about abs, but that’s not technically accurate. I mean, everybody has to blink sometimes, and every once in a while I have to go get a drink of water. But aside from that, yeah, it’s pretty much constant.

But if you can minimize—or completely eliminate—these mistakes, you might just see your abs pop out sooner than planned.

1) Forgetting About Compound Exercises
If you strictly perform isolation ab exercises, you’re making a huge mistake. Compound movements like deadlifts,squats, and overhead presses engage every inch of your core. Don’t forget to include them in your training program.

2) Doing Ab Exercises First
Your abs are part of your core area, which helps stabilize your body. If you fatigue them early in your workout, you will have a hard time doing other ab-intensive exercises like squats.

And just so we’re clear, the role that your core plays in squats is to protect your spine, so you want them to have a full tank at that point. Save your ab training for the end.

3) Thinking You Can Out-Crunch Your Diet
The secret to visible abs is no secret at all: Lower your body fat percentage. This doesn’t happen by doing hundreds of reps of ab exercises—nor thousands, nor millions. You can train your abs all you want, but if your diet isn’t in check, you’ll never see that six-pack.

4) Having a Full Workout Just for Abs
All you need is 15 minutes. If you’re already doing compound exercises like squats and deadlifts, one or two ab exercises for 2-3 sets each at the end of your workout is sufficient. 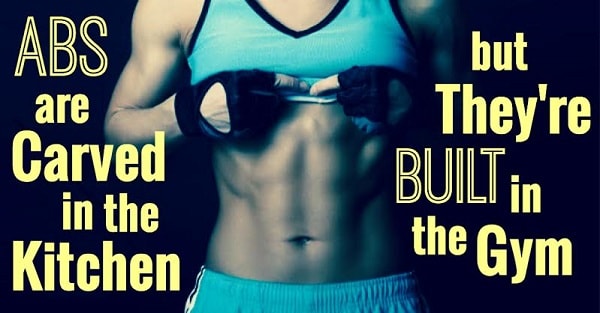 YOU CAN TRAIN YOUR ABS ALL YOU WANT, BUT IF YOUR DIET ISN’T IN CHECK, YOU’LL NEVER SEE THAT SIX-PACK.